I’m beyond thrilled to share the cover for TWIN DAGGERS, my debut young adult novel and the first book in a new fantasy duology set in a world of magic versus machines!!! PLUS I’m giving away a Signed ARC at the end of this post!

Twin Daggers has been a long time in the making. I began writing this book back in 2012, and it’s been that book of my heart, the between-contracts-guilty-writing-pleasure ever since. In short, I adore this story, these characters, this fantasy world so very much and it’s lived in my head for a very long time. I’m so grateful that this book will finally be out on bookshelves and to all those who’ve had a hand in bringing it there (in particular my agent Suzie Townsend and editor Hannah VanVels!).

Thanks so much to Blink YA and designer Faceout Studio for crafting a phenomenal cover to kick off this new series. It perfectly captures the idea of magic versus technology that’s at the core of the book and so many other fantastic elements. The machinery motif! The daggers that represent the main characters! The swooshes of magic! I love how dynamic the design feels too, how it evokes a feeling of perpetual motion. As an author, seeing your book cover for the first time is one of the best/scariest things, and they did such an incredible job – my jaw dropped when it appeared in my inbox! I hope you love it too! 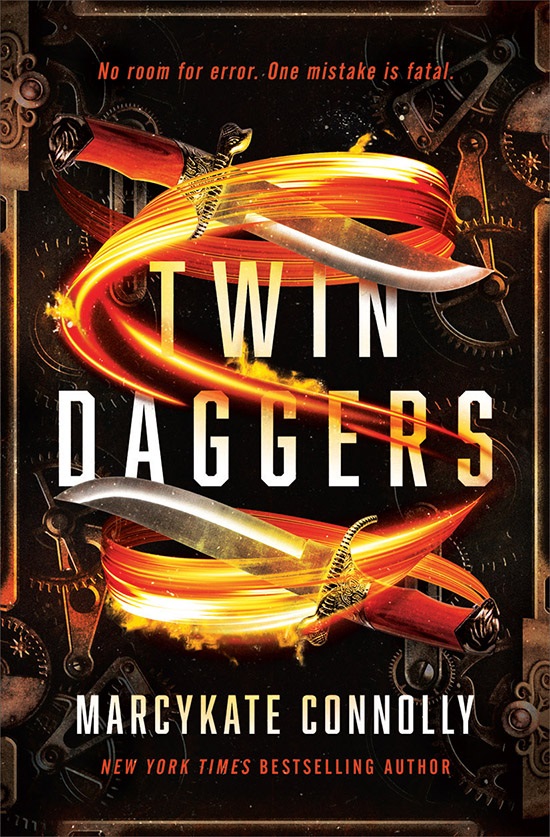 Aissa’s life is a web of carefully constructed lies. She and her twin sister, Zandria, are Magi spies, magic users most believe to be extinct. And they’re on a mission for revenge.

This action & adventure spy thriller—a fantasy spin on Romeo and Juliet from New York Times bestselling author MarcyKate Connolly—is perfect for fans of Marissa Meyer and Elly Blake and is about to become your new obsession!

By day, Aissa and Zandria play the role of normal young Technocrats eager to fulfill the duties of their new apprenticeships. By night, they plot their revenge to retake their city from the Technocrats. But then Aissa is given a new mission: find the heir to the Technocrat throne, who is rumored to be one of the Heartless, and kidnap her. Born without a working heart, the Heartless survive with a mechanical replacement.

Aissa is more likely to be caught than to be successful, but she’s never been one to turn down an assignment, even if the hunt is complicated by a kind Technocrat researcher who is determined to find a cure for the Heartless. But when Zandria is captured by the Technocrats, Aissa will do anything to get her sister back. Even if it means abandoning all other loyalties—and missions—and deciding whether or not it’s worth risk everything on getting help from her sworn enemies.

The giveaway will run from today through midnight EST Saturday November 30, 2019 and is open internationally. One winner will be selected. Good luck!!